Getting into Private School 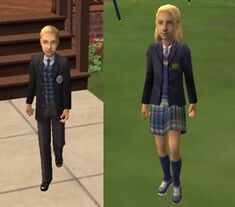 The uniform worn by those who attend private school

This article describes features that are only available in The Sims 2.

In this game guide, readers will learn how to successfully complete the Headmaster scenario, and therefore get the children/teens of the household into private school. 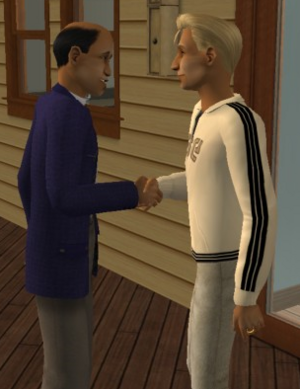 Once called, the Headmaster will arrive at 5pm and a 6-hour scenario will start when he is greeted. The player has to reach a score of 90 (out of a possible 135) to get the family's kids/teens accepted into private school. There are three tasks that can be performed to build the score. To offer the Headmaster a tour of the house, or invite him to dinner, click on him and select an interaction under the "Entertain..." category. To schmooze, click on him and select a "Schmooze..." interaction.

An example of a good reaction from the Headmaster

To prepare dinner for the Headmaster, have the Sim with the highest cooking skill in the household cook a meal. Once the meal has been made and served, select Entertain... > Call for Dinner by clicking on the Headmaster. Be sure that the meal has been served, or that individual plates have been prepared, before selecting this option, otherwise the Headmaster will not respond. This category's score will be posted in the dialog box once the meal is over, along with any Schmooze points that were earned during the meal.

To Schmooze with the Headmaster, click on him and select Schmooze... and one to four options will appear: Schmooze about school, work, money, or politics. Options other than schmoozing about school will appear as the Sim's relationship with the Headmaster grows. The latter two options will not appear unless there is a high relationship with the headmaster, though they will give a high score if successful.

Getting the Headmaster to do any of these things once will earn an extra 10 points: 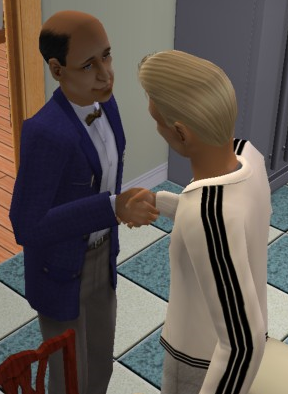 Shaking hands with the Headmaster after 90 points have been earned

As soon as the total score breaks the 90-point requirement, the headmaster will leave, even if there's time remaining on the clock, and the child/teen will be allowed into private school. The next weekday, the accepted Sim will change into a uniform and then board the school bus as normal. If the time limit expires and the score has not been met, players can try again the next day.

This tutorial was a Featured Game guide in January - March 2017. Its layout and content is an example of excellence on The Sims Wiki.
Retrieved from "https://www.thesimswiki.com/w/index.php?title=Game_guide:Getting_into_private_school&oldid=769521"
Categories:
Hidden category:
Cookies help us deliver our services. By using our services, you agree to our use of cookies.