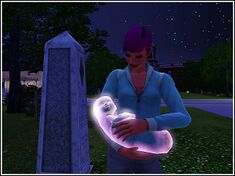 A proud mother with her new ghost baby.

In The Sims 3, it is possible to "Try for Baby" with a ghost and spawn a ghost baby.

Ghost babies conceived either from a ghost female or by a ghost male are NOT immortal. They will age just like every other Sim, and even die of old age. They cannot, however, die of starvation, drowning, fire, meteors, mummy's curse, or electrocution. When the ghost "dies" of old age, the game will actually say that the Sim has moved on to the Netherworld and the player no longer has control of the ghost. The ghost child can use their tombstone to move on to the Netherworld by choice. If the player chooses to resurrect them again, their age will be reset to the maximum number of days before they age up, which can be very useful. Ghost babies are like ghosts in every other way, such as appearing as dead on the family tree.

Ghost babies can also be conceived in The Sims 3: Generations by having a man and woman drink the ghost potion and try for baby while they are still ghosts.

Ghosts in The Sims 4, regardless of age or gender are unable to conceive a baby. There is no "Try for baby" interaction for ghost-ghost or ghost-sim couples. The only ways to get a ghost child is to create one in CAS through ghost parents or getting the "death" outcome when wishing for a child at the wishing well. However, because toddlers can't die and become ghosts, the minimum life stage to be a ghost is child.

If the baby looks like a normal Sim, it will be completely normal in every way. The baby can, however, inherit the skin, hair, eye color, and other traits from the ghost parent. If they have the appearance of their ghost parent/parents, then they will appear in the family's picture.

The player can still edit these ghost Sims in Create a Sim with the dresser and mirror, but in there the ghost will appear as a normal Sim with usually glowing white eyes. However, if Supernatural is installed, the ghost Sim will keep their ghostly appearance.

Retrieved from "https://www.thesimswiki.com/w/index.php?title=Ghost_baby&oldid=949652"
Categories:
Cookies help us deliver our services. By using our services, you agree to our use of cookies.