The Hart family consists of Dorie, Gus and their daughter Bebe. Both parents have the insane and the childish traits, pressuring Bebe to either conform to her parents' ridiculous lifestyles or to help them act normal. The family lives on 303 Skyborough Blvd in Primrose, a 2br, 2ba, 30x40 lot. It is described as a "Remodeled two-story Victorian house with an accessible layout and open kitchen/breakfast nook area."

There are several other Sims with the surname "Hart" throughout The Sims series, including Randy Hart from SimValley, Sam Hart from Belladonna Cove, and Matthew Hart from La Fiesta Tech. They may also be ancestors of Simon Hart from Lunar Lakes. However, the relationship between them are unknown. 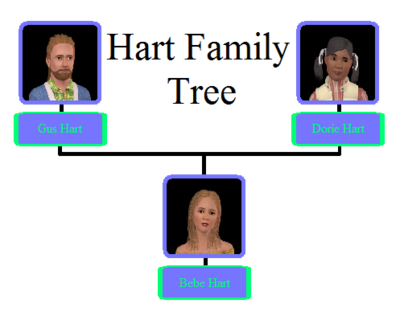 Retrieved from "https://www.thesimswiki.com/w/index.php?title=Hart_family&oldid=379140"
Categories:
Cookies help us deliver our services. By using our services, you agree to our use of cookies.