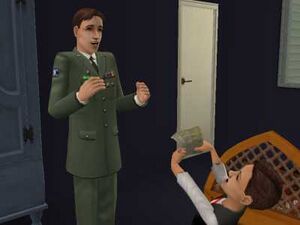 An autonomous reaction or interaction is one which a Sim does that isn't player defined. These can be reactions to the environment, for example, a smelly trash can, an unusual event, for example, a Sim dying, a bad memory, a missing object or simply something for a Sim to do if they haven't been told to do anything - providing that free will is on. This adds an extra dimension to the game, making the Sims unpredictable and somewhat free from complete player domination—however, a Sim will terminate most actions if the player either tells them to do so or tells them to do something else.

If a Sim receives a bad memory, that Sim will often spend a few days randomly stopping actions in their queue to cry or sigh about the memory. There is nothing the player can do about this. If a Sim is furious with someone, they may think negatively about that Sim in anger, depicted with a fiery thought bubble containing the face of the Sim they are furious with. After an object is bought and the game is switched, household members may check it out. Their response may vary by applauding, crying or cheering over the object.

Some moodlets may cause the Sim to feel, act and behave a certain way. 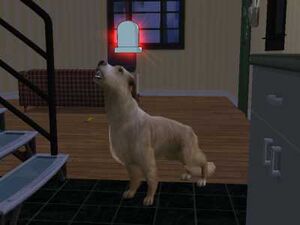 A dog mourns his owner - another autonomous action

These include reactions to fire and birthdays, weddings, births, deaths etc. When such an event takes place all the Sims on the lot are called to the place where the event is taking place. With the exception of fire (due to the fact that the action is immediately re-queued after), these actions can be canceled.

Even if a Sim does not witness an event such as dying, they will still react to it when they return from where they were.

These include the 'attraction' and 'smells yummy' actions that appear when a Sim walks into a room where there is a Sim with similar chemistry or a plate of well-cooked warm food or a similar scenario. Sometimes they are nothing more than a thought bubble and a facial expression. If a Sim stinks, other Sims (with the exception of slobs)[confirmation needed] will react in disgust.

In The Sims 3 and The Sims 4, a grubby environment will result in a negative moodlet. As the environment's condition worsens, the moodlets are more and more negative.

Unlike free will in The Sims (in which a Sim would happily starve to death without the guidance of a patient player because the TV was closer), The Sims 2 has a more sophisticated (though not perfect) way of giving Sims some common sense. It works as a scoring system. Each object on the lot gives out a signal to Sims near by, with objects such as the fridge giving out a larger signal than other less vital objects, such as the TV. If a Sim has a low enough hunger score (i.e. is hungry) the fridge's signal is more likely to acquire a response from the Sim (according to the primary guide). In general, what a Sim does is determined by both needs and closeness, instead of just closeness like the first game.

The 'signal strength' is based on how much the object can satisfy a particular need, the Sim's personality, their current need levels, and the objects' distance strength. Objects broadcast a signal saying how well they can satisfy a particular need. Two chairs for example, one cheap and one expensive, will broadcast different strengths for how well they can satisfy the comfort need. The expensive one will win in this case, unless it's already taken by another Sim. Some objects can 'cheat' and broadcast need fulfillment that they don't give, such as a ringing phone.

The third modifier to signal strength is the Sim's current need levels. If a Sim has a low hunger score, going to the fridge is a higher priority than the pool table. The same goes for things like comfort, energy, bladder, etc. Often, this can be one of the larger modifiers to the signal strength.

When several need fulfillments are queued, free will often chooses certain ones over others. An estimate order in what Sims will fulfill, in descending requirement, is Hunger > Energy > Hygiene > Bladder > Comfort > Social > Fun. Environment is random.

The last modifier is the signal's distance. Some objects broadcast over the entire lot (beds), while others only over a short distance (newspaper). Each object is different, and it can help the Sim decide which object to choose. Why would a Sim want to go to the fancy toilet on the other side of the lot when they can just use the (mostly) clean one in the next room?

Some reactions are based upon the Sim's personality. For example, a sloppy Sim may get up from the table after eating to fart, while an outgoing Sim will greet others in the room as they're walking.

View past articles · Vote on future Featured Articles · Other Featured Content
Retrieved from "https://www.thesimswiki.com/w/index.php?title=Autonomous_reaction&oldid=279325"
Categories:
Hidden categories:
Cookies help us deliver our services. By using our services, you agree to our use of cookies.