The Alto family is a wealthy pre-made family. They first appeared in the "The Heist" trailer for The Sims 3 when Nick and Vita Alto bickered after Nick farted audibly. The pre-made storyline for the family involves a business feud with the Landgraab family, as Nick and Vita are enemies with Geoffrey and Nancy Landgraab (although Holly Alto is merely acquaintances with both her parents and the Landgraabs) as well as the fact that Nancy Landgraab and Nick are both on the same career level trying to get ahead. They live in a mansion in the upper-class area of the town, across from the mansion of the Landgraabs. Their last name is a pun on the television show, The Sopranos. Despite only being introduced during The Sims 3 era, they quickly became one of the families in the franchise with the most appearances in the series, alongside much longer-running characters such as the Landgraabs and the Goths. In total, the family has appeared seven times to date: once in The Sims 3 base game, twice in expansion packs for The Sims 3 (including one mention of a lore character), three times in DLC content for The Sims 3, and once in The Sims 3 for Nintendo DS. However, they do not appear in The Sims 4.

It has been implied that they - at least, Nick and Vita - are the "bad guys" in town. The town, filled with traditional old money families like the Goths and the Landgraabs, got disturbed when the city-bred Alto family arrived with their city-born personality and try to change the system of the town to a more modernized, corporate fashion. The residents of Sunset Valley will have to pick the side of either the Altos with their uptown ideals or the Goth's more traditional views. The Altos aren't as involved in a conflict with the Goths, however, as they are with the Landgraabs. Even though it is said that they run most of the towns commercial properties, the family does not start with any real estate properties belonging to the family, but with their large family fund at the beginning of the game, it is possible for the player to buy out some of the establishments in town.

The family is described as "Nouveau Riche and Evil," and they fit the description perfectly. Both parents are either mean-spirited or evil and are enemies with the Landgraab family. According to the family bio, the Altos are ruthless, unafraid to plot the misfortune of those who stand in their way. They are also the perfect example of New Money, as, unlike the "Old Money" Landgraabs, they flaunt their wealth through their clothes and material wealth: they wear stereotypical, wealthy clothes (Nick wears a suit and Vita wears a mink coat with fur trimming, but even their other clothes for other occasions scream "wealthy"; the Landgraabs wear simple but decent clothes), have expensive cars (they own the most expensive car, a Margaret Vaugester, while the Landgraabs have a moderately-priced car), and the Villa Alto is a tacky mansion that flaunts the Alto fortune with its gaudy lawn, golden furniture, and excessive bookshelves and paintings, in contrast with the Landgraab's simple but elegant mansion.

However, in contrast to Nick and Vita is their daughter Holly. Unlike them, she is a good Sim who does not play the role of what their expected offspring should be. She is neither cruel nor tacky and has made friends of her own and no enemies at the beginning of the game. She dresses like a middle-class teenager with a yellow, floral long-sleeve top, khaki capri pants, and slippers, and other than her formal attire, she can easily be mistaken for a daughter of a middle-class family. She looks nothing like her parents, with a bright face and ash-brown hair and slim figure. In the household, her room is probably the least expensive, if you don't include the bathroom connecting to both her room and the kitchen.

It is revealed in The Sims 3: Late Night that a possible ancestor, Ebenezer Alto, founded Bridgeport, which could mean that is where Nick, Vita, and Holly moved from. This is very likely because they are very rich and industrial and Bridgeport is a rich, industrial city.

In The Sims 3 for Nintendo DS, Holly re-appears in the neighborhood Beacon Bay, but with a very different appearance and personality which she appears to have inherited from her mother, unlike her counterpart from Sunset Valley. At this point in time, she is married to Don Alto, who appears to have taken her last name. Her family bio states that she and her husband's motto is "rich, rich, rich" and that many business practices have distanced them from happiness and redemption. Since a grown-up Alexander Goth from The Sims 2 is in the game, and since, in Sunset Valley, Holly is already a teenager during Mortimer Goth's childhood, it seems likely that Holly would be deceased by then.

In the town of Hidden Springs, it is learned that Nick Alto has a brother named Bert, who is living there with money from a mysterious source. For unknown reasons, Bert appears to be hiding, possibly from his brother Nick and/or previous clients.

Some descendants of the Alto family appear in the town of Lunar Lakes; Trenton Alto, his wife Eleanor, and his son Jareth.

In Sunlit Tides, Griffin Alto went on a vacation before taking over the family enterprise. Still, he got engaged to Tenika Wahine. However, Tenika's father hates Griffin and wants to tear the two apart.

In Isla Paradiso, a new neighborhood introduced in The Sims 3: Island Paradise, there is an Alto family. It consists of husband and wife couple Lopita and Alfonso Alto and their daughter Ashley Alto. It is unknown who they are related to or descended from. 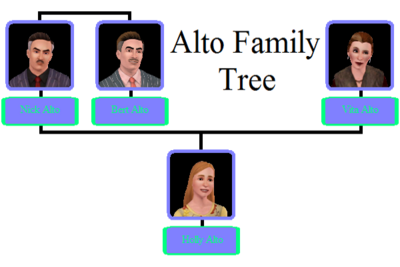 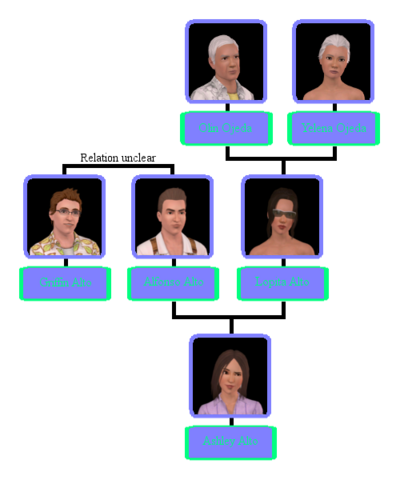 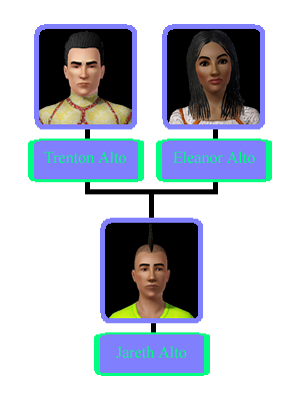 Villa Alto: This executive home features multiple living areas and a stately home office. It is perfect for operating the family business... or accommodating the family that -is- the business.

Retrieved from "https://www.thesimswiki.com/w/index.php?title=Alto_family&oldid=911538"
Categories:
Cookies help us deliver our services. By using our services, you agree to our use of cookies.