From The Sims Wiki, a collaborative database for The Sims series
(Redirected from El Bandito)
Jump to navigation Jump to search

Raccoons appear in The Sims: Unleashed, The Sims 3: Pets and The Sims 4: Cats & Dogs. El Bandito right before he jumps into a garbage can

The Sims: Unleashed included an NPC raccoon known as "El Bandito." This raccoon will appear randomly at night and will raid the garbage can, creating a mess and waking up any Sims (human or pet) who are sleeping. He will often wander around the lot before deciding to head for the garbage can.

Adult Sims can call Animal Control, which will send someone to remove El Bandito for a §20 fee. Adults and children can try to shoo him away, though they won't do so autonomously and he won't always leave if they do. A dog may autonomously choose to fight El Bandito. If the dog wins, the raccoon will leave.

Raccoons return in The Sims 3: Pets, where they wander in the player's home neighborhood following the installation of the expansion pack. A Sim can either "watch" or "shoo" the raccoon, although some Sims may be able to pet them. Raccoons can often be seen tipping over garbage cans on residential lots. Watching raccoons raises a Sim's hidden Wildlife skill. Raccoons also do not have any traits. 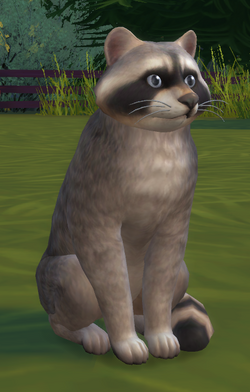 A raccoon in The Sims 4.

Raccoons are present in The Sims 4: Cats & Dogs as a cat breed with a unique raccoon voice. They can be adopted by Sims and can mate with cats. The default traits for raccoons are territorial and mischievous. Aside from their appearance and voices, however, they act and behave like normal cats.

Retrieved from "https://www.thesimswiki.com/w/index.php?title=Raccoon&oldid=926330#The_Sims:_Unleashed"
Categories:
Hidden category:
Cookies help us deliver our services. By using our services, you agree to our use of cookies.