Not to be confused with Fresh Rush Grocery.

At Fresh Rush Grocery you can find all of the freshest foods your Sims can purchase. Check out our locally grown produce too! Don't have time to cook? We also sell fully-cooked, ready to eat meals; just buy it and enjoy!

The following was posted to ModTheSims on July 8, 2017. The original post can be found here.

Fresh Rush Grocery was once a small, humble little grocery store in the Downtown subhood, a grocery store that saw relatively little use by those in the suburbs (After all, who goes Downtown just for groceries?). Nevertheless, it marked the end of the food desert and permitted the rise of nearby middle and upper class residential housing units, and was frequented by Downtownies. However, it wasn't a really good place to have a date, considering that most dates probably don't want to include chores into the mix (Like grocery shopping)...

Okay, enough of that. Fresh Rush Grocery's an unowned community lot, so it was easy to pop the lot into the lot bin and move it into whichever neighbourhood I wanted to move it into. Fresh Rush Grocery was built in SimVille after the town's boundaries were extended and was bought by Amar shortly afterwards. He drastically altered the place in order to suit his own entrepreneurial spirit — and to meet the needs of his customers. 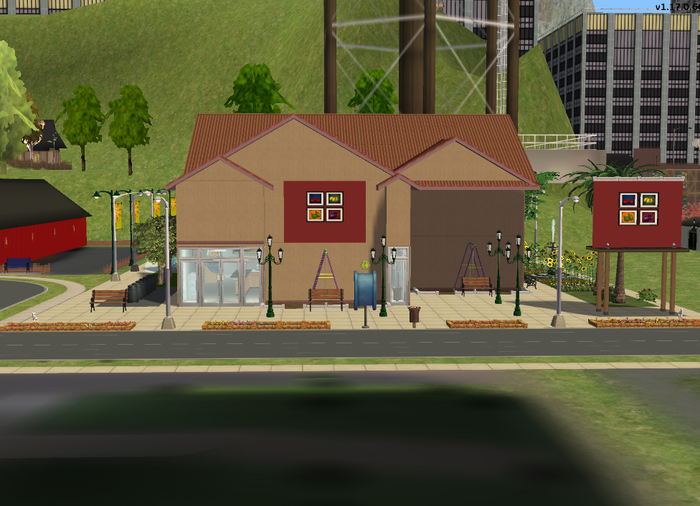 Fresh Rush Grocery has only one usable floor and a very high ceiling. Amar mostly kept the original structure of the store intact, although he did build an extension of the building. He also changed the exterior quite a bit, getting rid of the bland pavement in exchange for more shrubs, flowers, and trees. 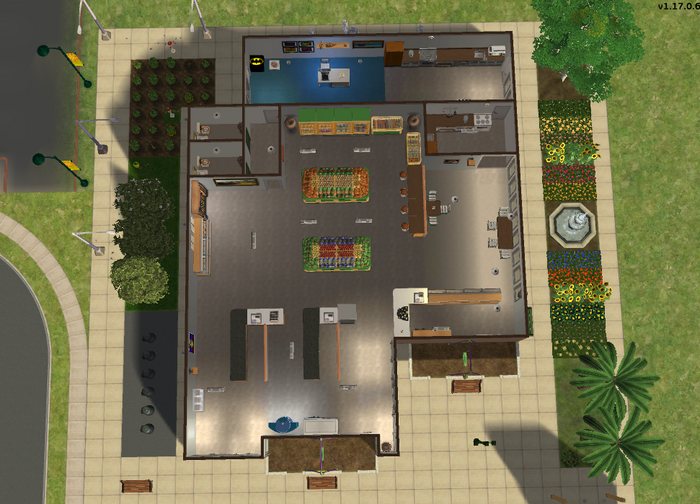 At first glance, though, you probably won't notice much change. Amar kept the main entrance intact, and the swings that townies randomly go on because they're the only fun objects on the lot are still there. 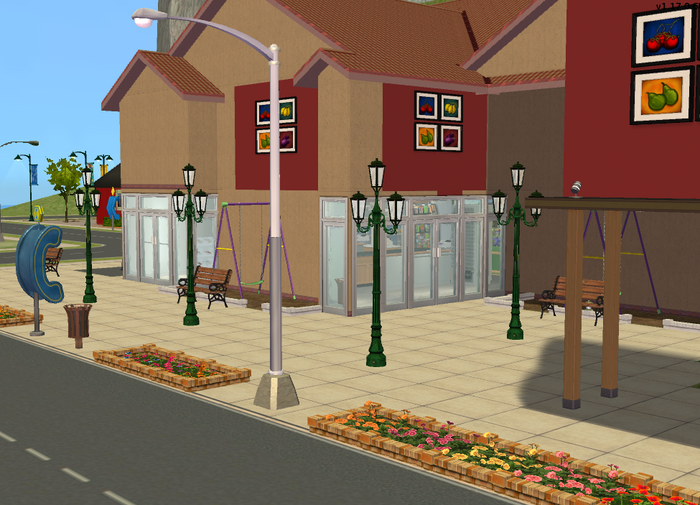 The right side of the lot saw quite a bit of change, though. Instead of boring pavement, Amar ripped it all out and planted a ton of flowers, shrubs, and even a fountain here. All of this is visible through the windows looking out from the "dining area" inside. Sure is better than looking at asphalt while enjoying your cheeseburgers. 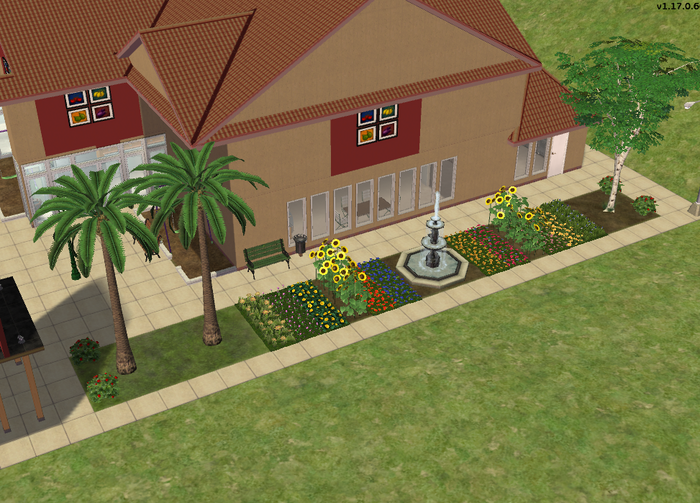 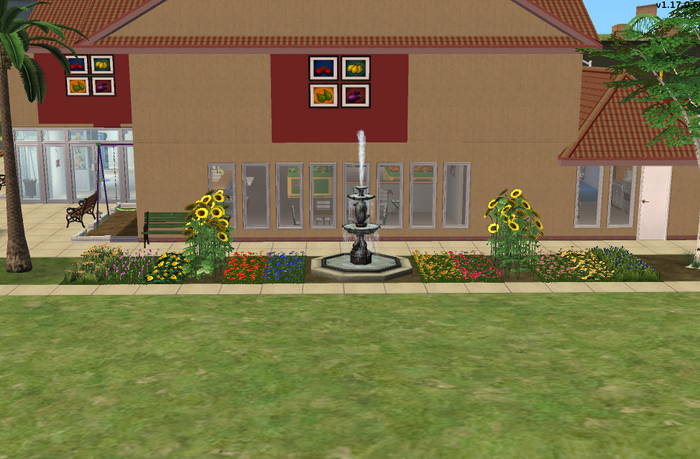 The left side of the lot also saw a lot of change. Amar removed most of the asphalt and planted some produce-bearing trees and plants. He also added in a number of compost bins for fertilizer. 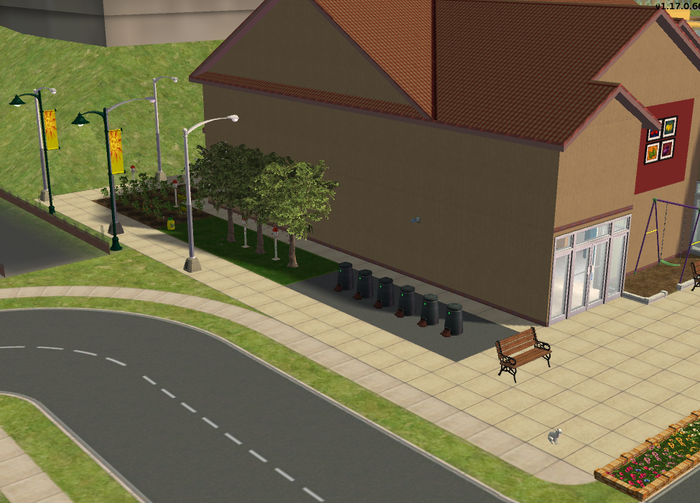 Yes, as you might have guessed, Amar grows produce here at Fresh Rush Grocery, and he sells them exclusively here too. Most Sims in SimVille don't have room to grow their own food, so Amar grows all of the fruits and vegetables introduced in Seasons. His dream is to encourage more local farming in SimVille instead of relying on food imported from elsewhere, and for Sims who don't have the money or the space to do that, they can still purchase locally-grown food that didn't hitch a ride in the back of a truck. Sadly, no other Sim in SimVille actually grows food of their own... except for Serge Barb, interestingly enough! 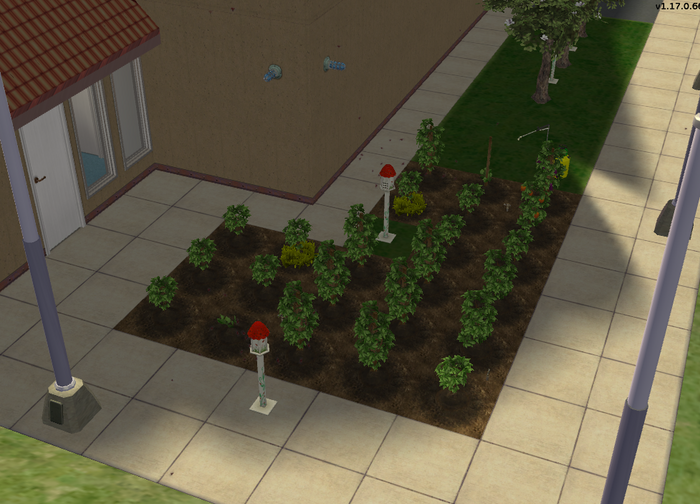 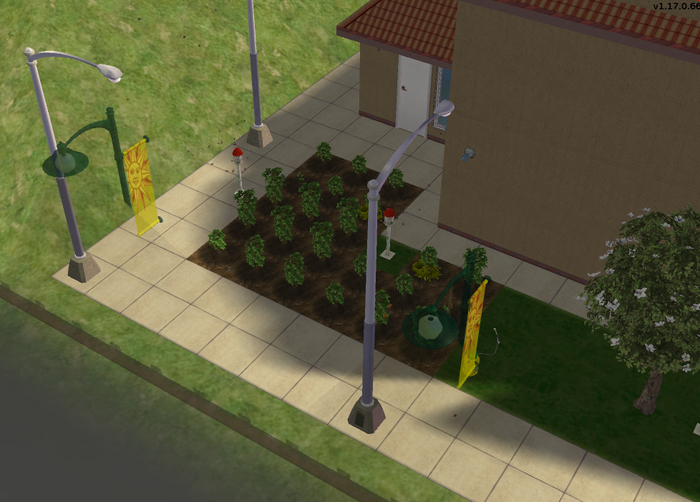 Moving along. Inside, some parts have hardly been touched. The checkout aisles have been left intact, as have the cell phone kiosk, photo booth, video game rack, and freezer. 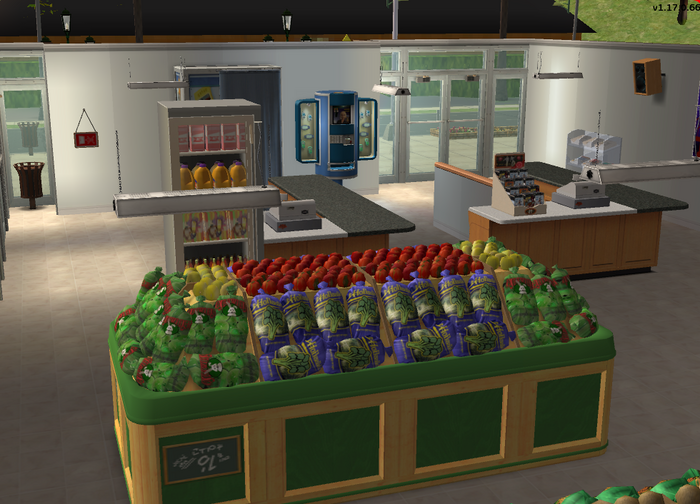 The fruit and vegetable stands have mostly been left alone too. 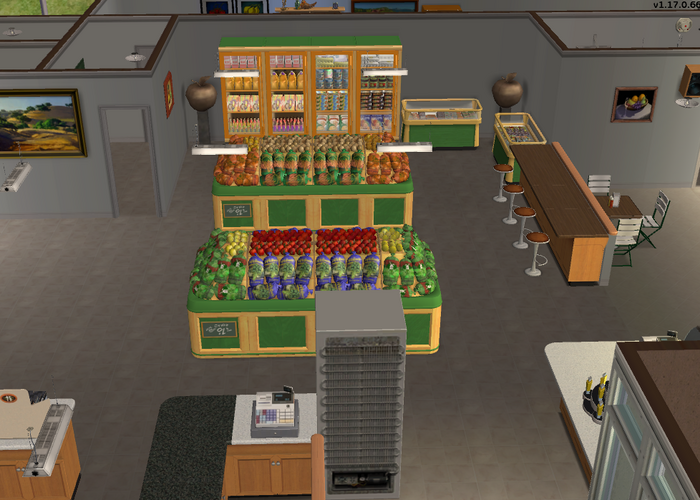 If you read my story about the Torres, I mentioned that Fresh Rush Grocery sells some premade food, ready to eat immediately upon purchase. Well, here's where that stuff is sold. Amar sells pancakes, grilled cheese sandwiches, toaster pastries, lunch meat sandwiches, mac and cheese, chef salad, spaghetti, salmon, Santa cookies, layer cake, gelatin, cheesecake, turkey, and Baked Alaska. It's not everything, but it's a lot, and it's certainly enough to impress the Headmaster if you choose to invite him over. 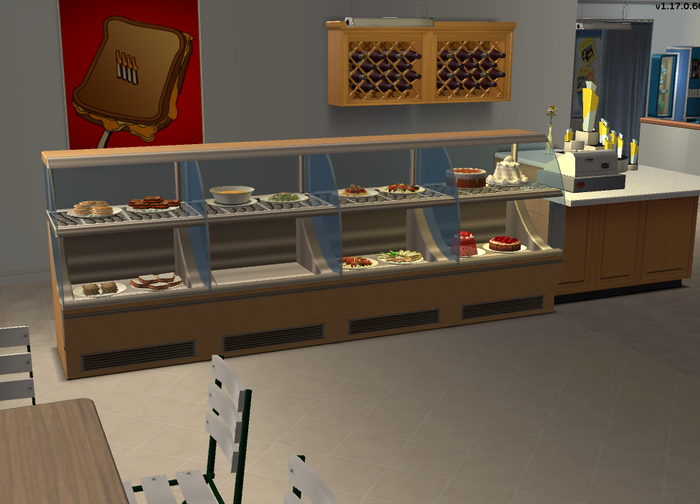 The dining area is a good place for guests to enjoy their purchased meals. I have the Build Buy Enabler mod which allows me to simply pull out a customer's food from their inventory after purchase and place it out here for them to enjoy. I had a date here once, and it went quite smoothly. Nothing quite like buying a delicious meal and being able to enjoy it at a table of your choosing without having to deal with restaurant staff and pricey menus. For Sims that do not know how to cook, Fresh Rush Grocery can be a way to get some healthier food instead of just living off of pizza and Chinese food. 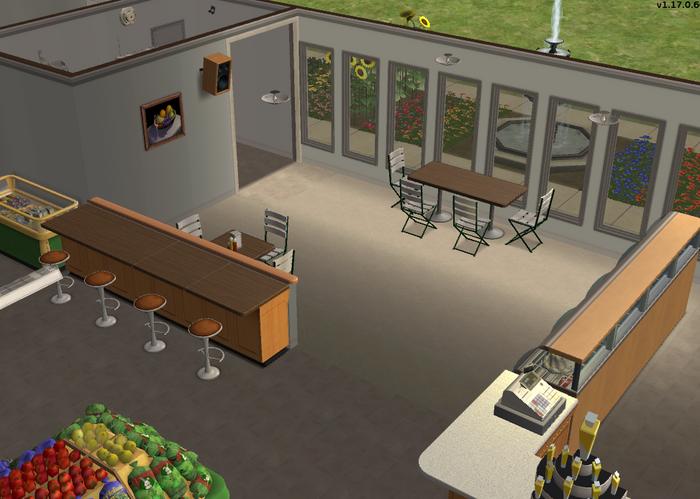 On the left side of the store, you can find the display counters where the grown produce is sold. Currently it only sells peppers and tomatoes, but Amar's working on expanding his inventory and eventually sell all kinds of fruits and vegetables here. Amar promises that everything sold here is in mouthwatering quality, and he'll never run out of stock! That is quite the thing to promise, and even Amar needs some time to build that up. 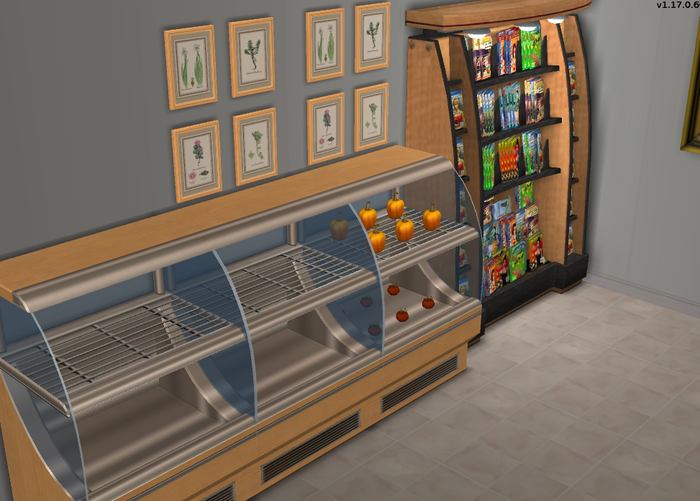 The bathrooms were left untouched. 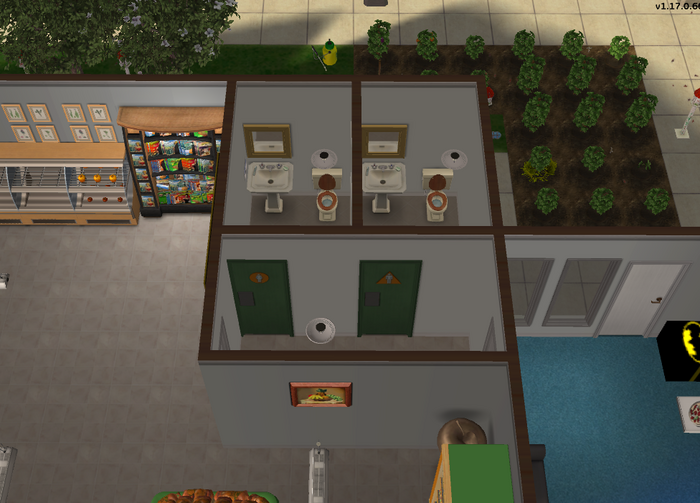 The premade food sold at Fresh Rush Grocery is usually prepared here. There are kitchens in Amar's Hangout and at home too, so some food sold here may come from there, but most of the time the food is made on-site. The first kitchen shipped with the default lot, and can be used by customers during normal business hours. The second kitchen, located behind a locked door, can only be used by employees. Before opening and after closing, Servos are usually here to replenish the food supply. 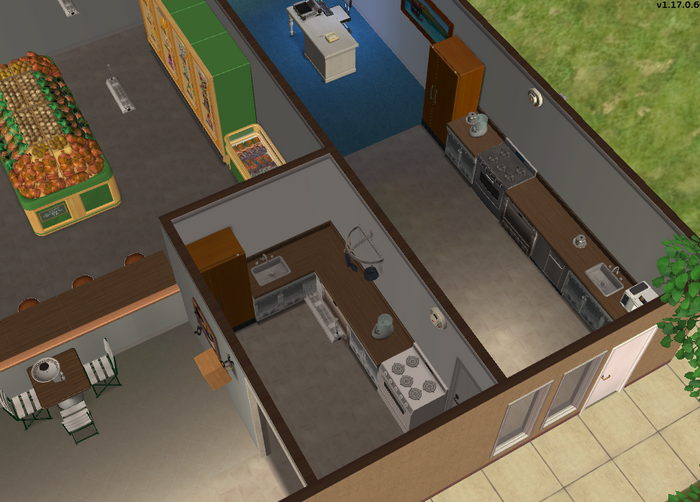 The latter kitchen is also part of the office, located at the very back, and is part of the extension that Amar built. It's a nice enough office, I guess. 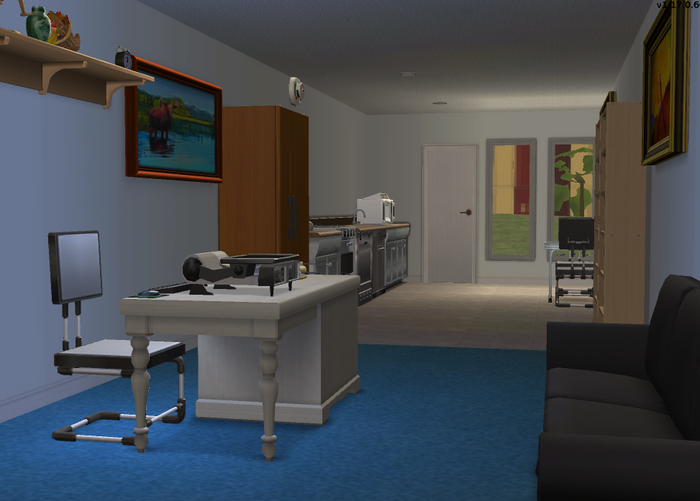 Well, it certainly has been great that I was able to crank this out away from home. Fresh Rush Grocery is located near some of the lower-class apartment units in SimVille, so Amar keeps his prices competitively low. Fresh Rush Grocery is also the only dedicated grocery store in SimVille, and Sims who want a larger selection of food to choose from tend to go to Amar's grocery store (As opposed to the frozen food sold in the corner store). Amar likes the fact that his business is the backbone for many a family's diet in SimVille, and he's happy to give back to the community. Even though not everyone is fond of the Newbie's wealth and influence in the region, they at least have to agree that, without Fresh Rush Grocery, the standards of living in SimVille — especially the west side of SimVille — will probably go down.

The following images were taken but were not processed on the date of capture, and were not included in the forum post.

Retrieved from "https://www.thesimswiki.com/w/index.php?title=Fanon:Fresh_Rush_Grocery&oldid=240793"
Categories:
Hidden categories:
Cookies help us deliver our services. By using our services, you agree to our use of cookies.