The Urban family is a family in SimVille. It consists of Johnny and Suzie Urban, and their identical twin boys Jared and Tommy.

The following was posted to ModTheSims on June 6, 2017. The original post can be found here.

My love for city living and disdain for all things suburbia spilled over into The Sims, and in my quest to create neighbourhoods that were more urban-like, I created the Urbans in a downtown subhood of my old, corrupted Pleasantview. 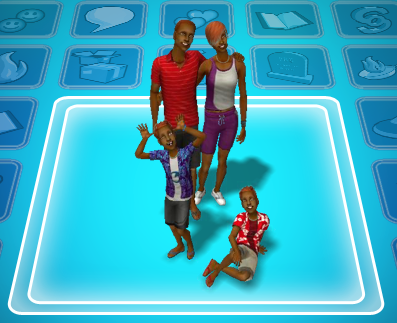 Of course, I wasn't so big on storylines back then, but now after recreating this family in SimVille, I decided to give them some bios to fill in the gaps and to give them a proper personality outside of the game's limitations.

The Urbans have seldom left urban environments, but will the adventurous side of the Urban twins change that?

The Urban family consists of Johnny and Suzie Urban, and their identical twin sons Jared and Tommy. The family gets along, but the four seem to form two groups of their own. For one, Johnny and Suzie share the same personality, while Jared and Tommy together share the same personality, different from their parents. The two Urban parents are content with settling down in the city and raising their family, but the Urban twins long for adventure both within and beyond the walls of the city. Spelunking in caves (and subway tunnels), hiking through tropical jungles (and the asphalt ones), and not caring about being covered in mud (and grime from urban pollution) all appeal to the twins, who long for more than the vacations their parents go on. 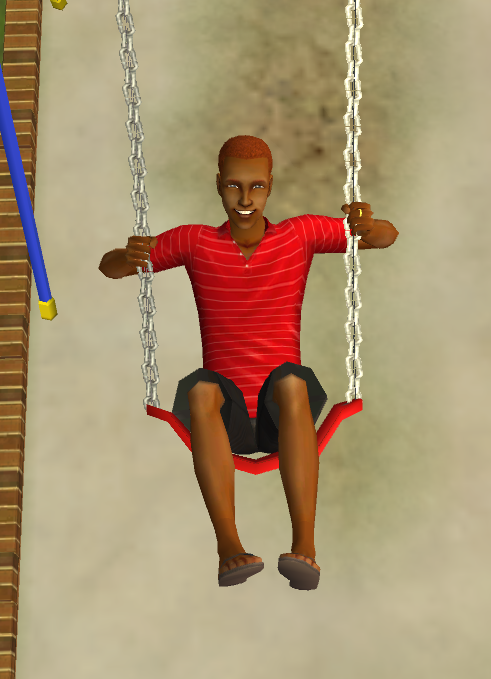 Johnny might be a veteran at getting dirt kicked into his face on the soccer field, but he doesn't like leaving home for extended periods of time.

Johnny Urban might remind you of Dan Newbie (and in fact the two are close friends). He has 0 neat points, a whole lot of outgoing and active points, and 5 playful and neat points (Actually, everyone in the Urban family has 0 neat points, and they have no Servos to clean up the mess... more on that later.). He currently works as an Assistant Coach in the Athletic career, a position he personally dislikes (you can thank — or blame — chance cards and secret networking benefits for the mess). He likes getting dirty, and what better way to get dirty than to be on the field yourself? Who cares if you've got dirt and grass all over you when you scored the most goals for your team? Despite this, Johnny still prefers having a shower at the end of the day to retreat to before going out to dinner with his friends and family to celebrate his victory.

When not at work, Johnny likes to socialize with his friends, go on "dates" with his wife, and lift. 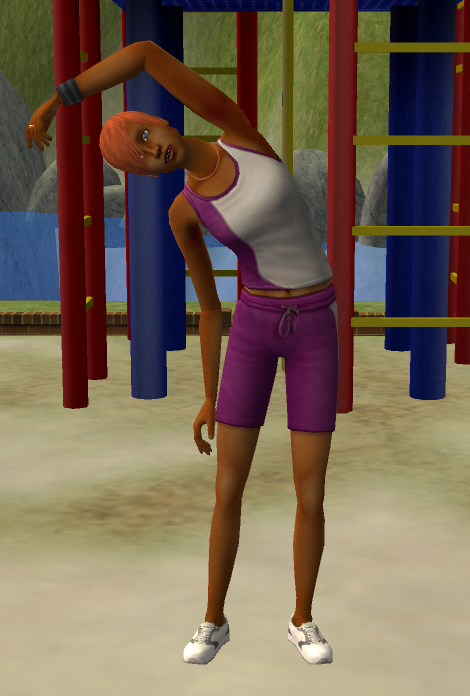 Suzie likes to keep her figure trim and slim, even though her job involves an awful lot of office work.

Suzie shares the same personality as her husband and currently works as a Detective in the Law Enforcement career. Suzie misses her old days patrolling the streets and would rather be in uniform serving the community than dealing with files and evidence. Still, she likes her job as it gives her a solid income that lets her and her family settle in quite nicely. Combined with her husband's paycheques, the Urbans are quite well off, even though they live in an apartment.

Suzie's job has led many law enforcement Sims to gorge on donuts and eclairs, but Suzie can't stand being overweight; not necessarily because it's unattractive, but because she has no plans on suffering from Type II Diabetes and heart disease. She frequently exercises to stay healthy and to serve as a role model for the obese cops in her precinct. Jared shares a very close bond with his identical twin brother Tommy. His hobbies include playing basketball with his brother and using the punching bag. 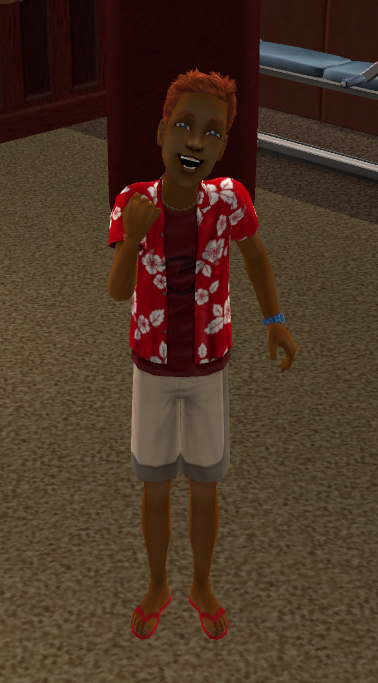 Tommy shares a very close bond with his identical twin brother Jared. His hobbies include playing basketball with his brother and using the punching bag.

I put the twins together because, well, they're identical twins. They share the same personality, skills, interests, and even hobby enthusiasm. If Jared does something, I make sure Tommy does it too. If Tommy makes a new friend, I make sure Jared befriends that Sim too. They'll do things for each other that they'll never do for anyone else, and though they sometimes fight, it's super rare and it has no effect on their relationship overall. Jared and Tommy are like peas in a pod... which is an overused understatement. Perhaps nothing short of being Siamese twins could bring the boys closer to each other than they already are.

Unlike their parents, Jared and Tommy aren't all that interested in settling down. Adventure lives in their blood, and if the game didn't impose so many restrictions on younger Sims, I'd honestly have them do more.[n 1] While the Urbans have been on vacation before, the Urban twins have always felt like their trips left something to be desired. Their recent trip to Three Lakes where they got to sleep in a tent under the stars excited them, but they still felt like they never truly experienced the life of living in a mountainous forest. Neither did they get the experience of truly living like a Twikkii Island local.[n 2] The twins aren't afraid of adventure and danger... as long as they are doing it together, that is. You'll rarely ever see Jared without Tommy, or Tommy without Jared.

The Urbans live on the second floor apartment of Sentinel Apartments, one of the default apartment lots that shipped with the game. I made no structural changes to this lot, only modifying the furniture inside of these apartments as needed to suit the Sims living in them. 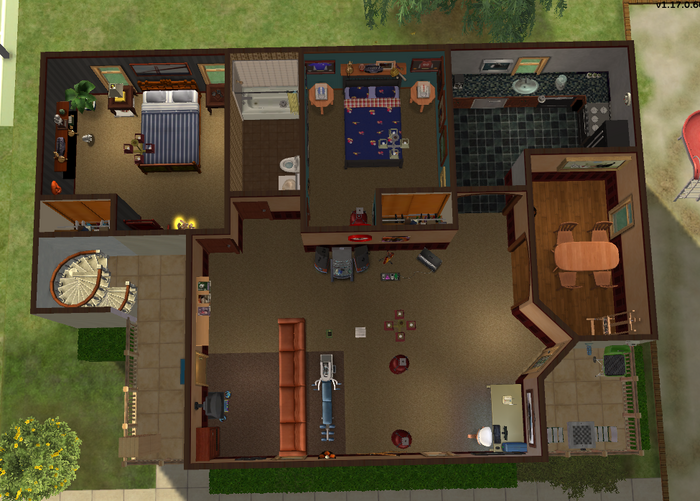 Sentinel Apartments does have one of the largest apartment playgrounds in the game, so I particularly like moving families with children into this one. 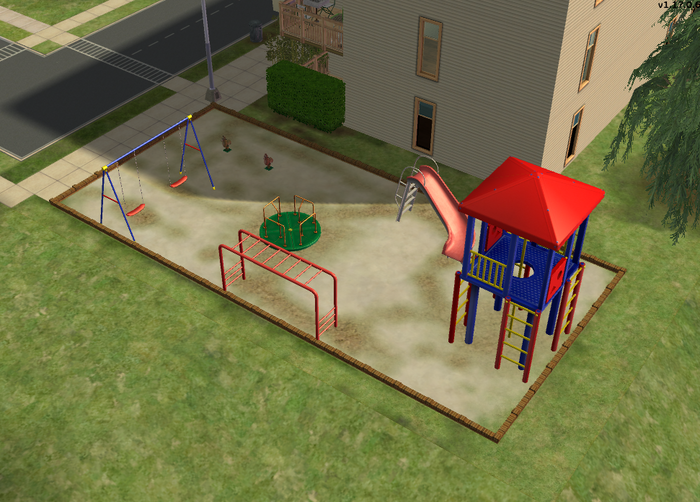 A brief glimpse of life in the Urban family

The Urbans are early risers. At 5AM, they're up and about. 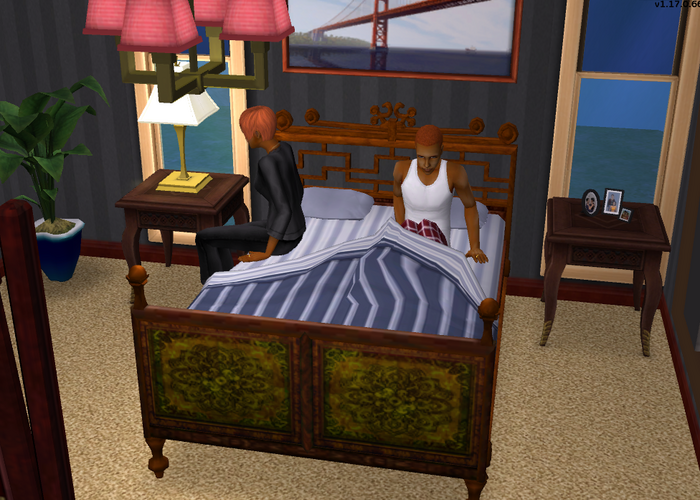 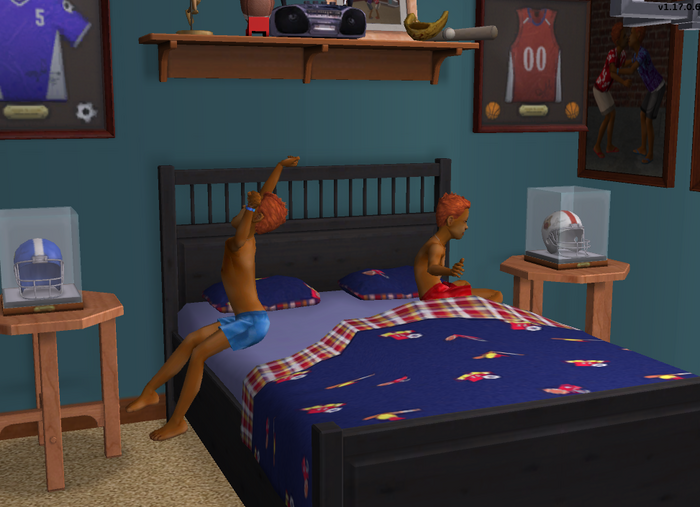 Either Suzie or Johnny prepare a simple breakfast of cereal, and the four indulge in conversation topics along with their food. 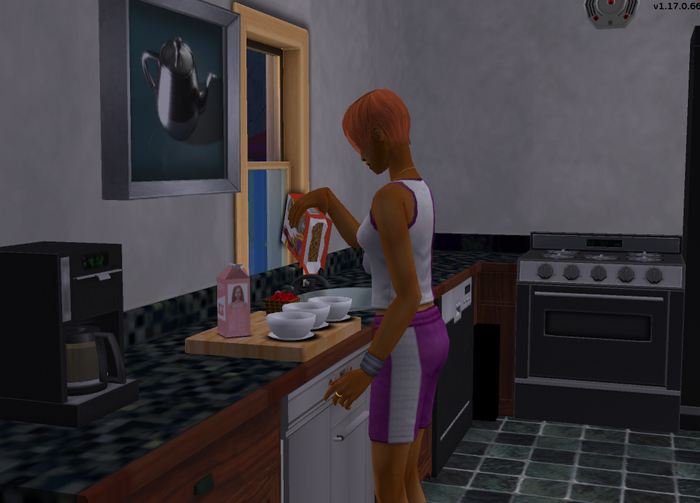 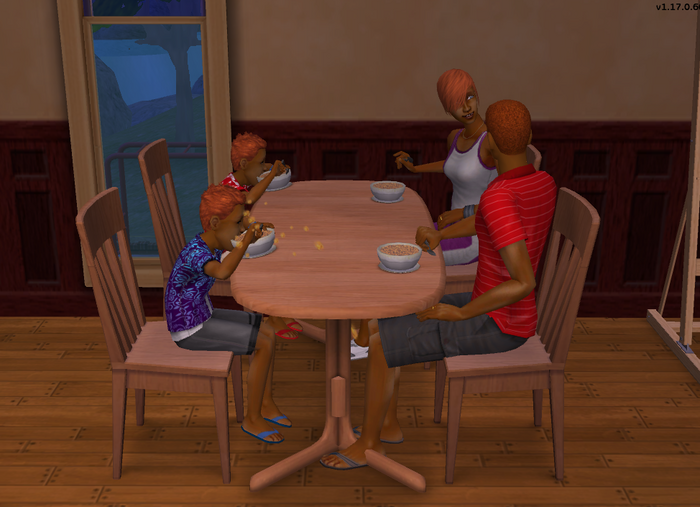 Mealtimes are always great for siblings. 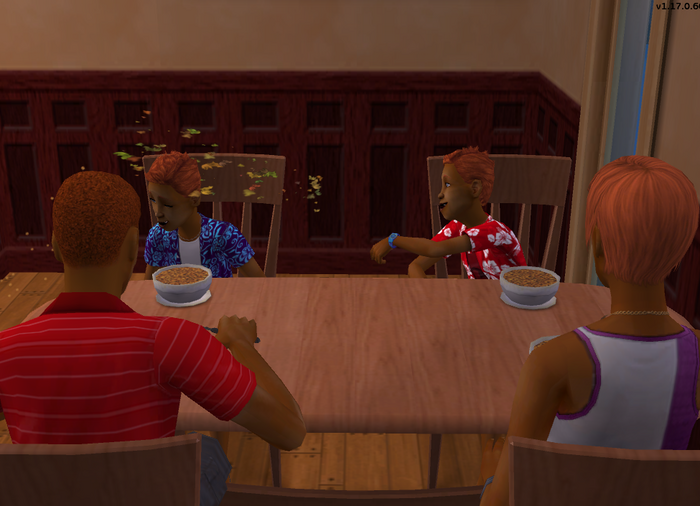 Today's a Friday, so all four of them need to go to work/school. They all conveniently have to leave at the same time too. Thank goodness Sims share the same carpool under these circumstances. 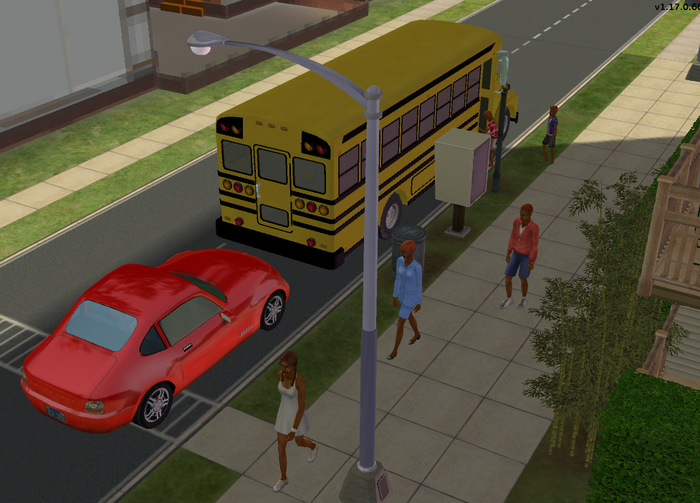 At around 10AM, the hired maid arrives. Yes, the Urbans need a maid due to their cleaning skills (or lack thereof).

And boy, does the maid have a lot of work to do. 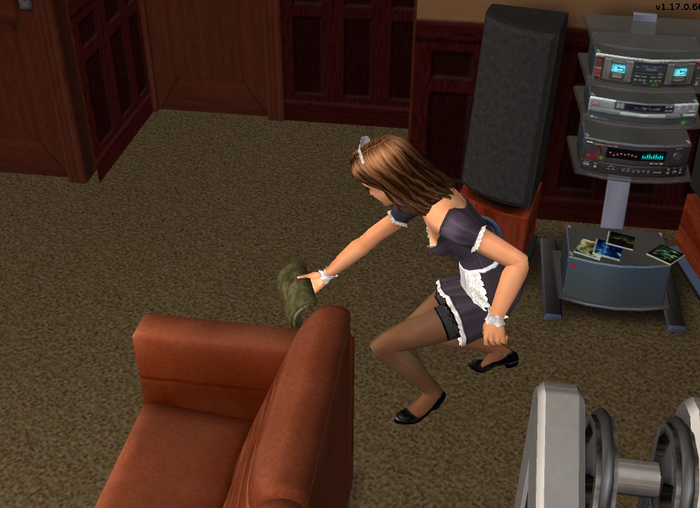 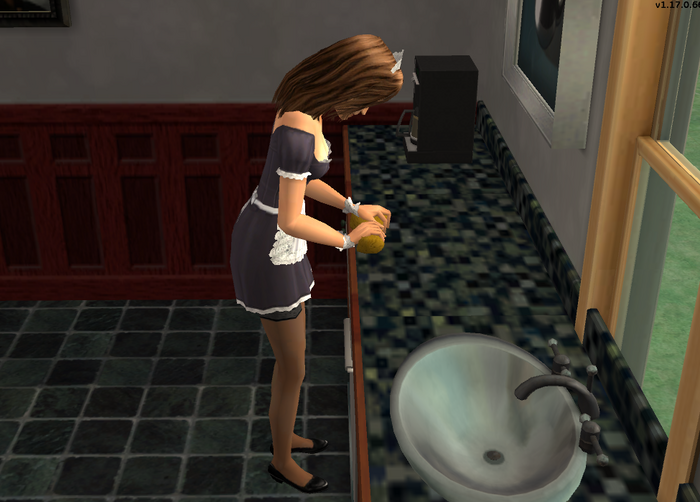 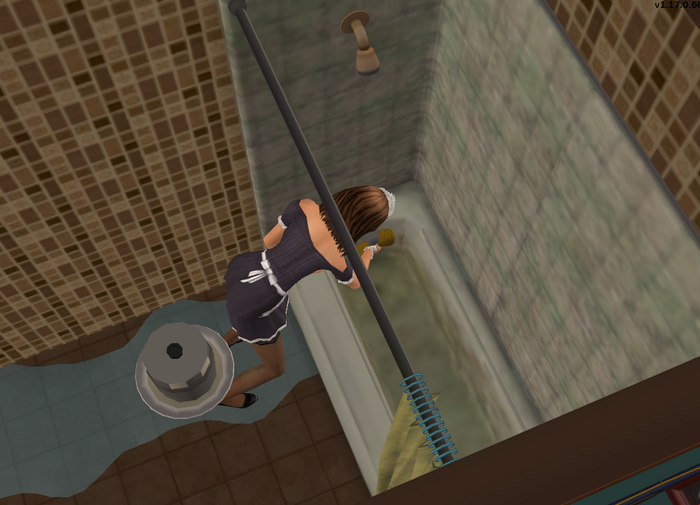 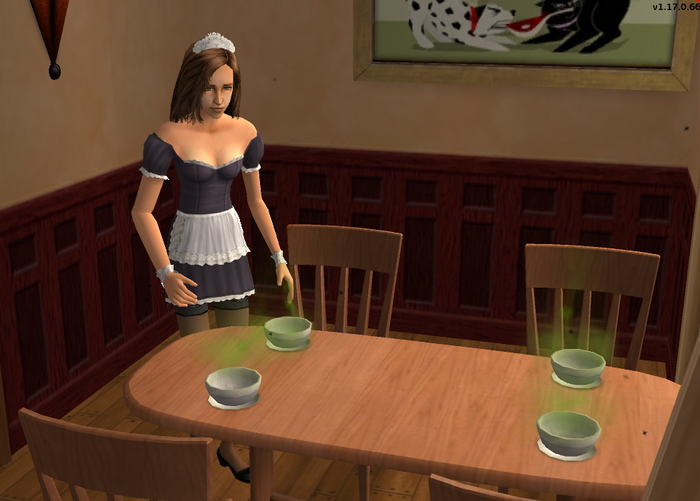 Johnny gets home by 2PM. He amuses himself on the swings, but sadly it would seem TS2 doesn't allow for Sims to jump off the swings. 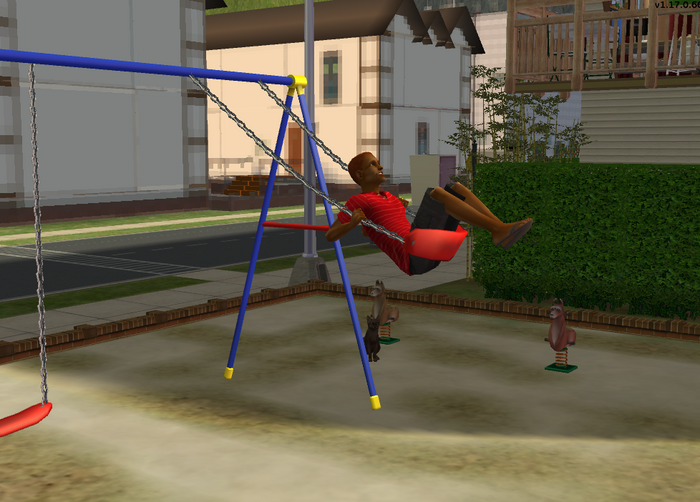 Suzie and the twins get home by 3PM. Suzie is delighted to find the exercise machine vacant, so she fills in that vacancy and shuns the donuts her co-worker offered her today. 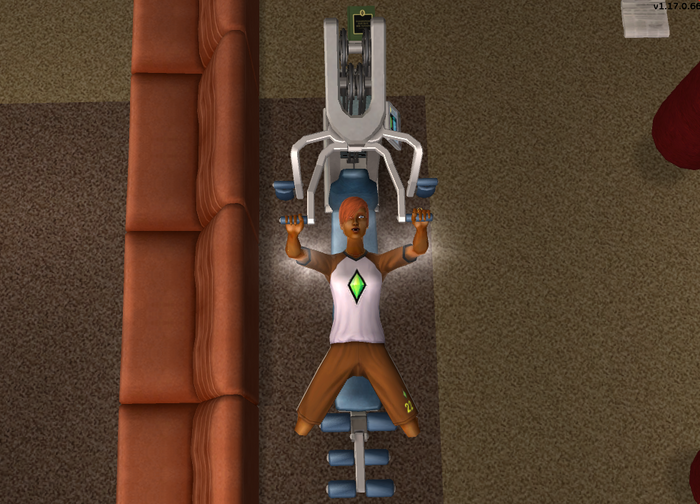 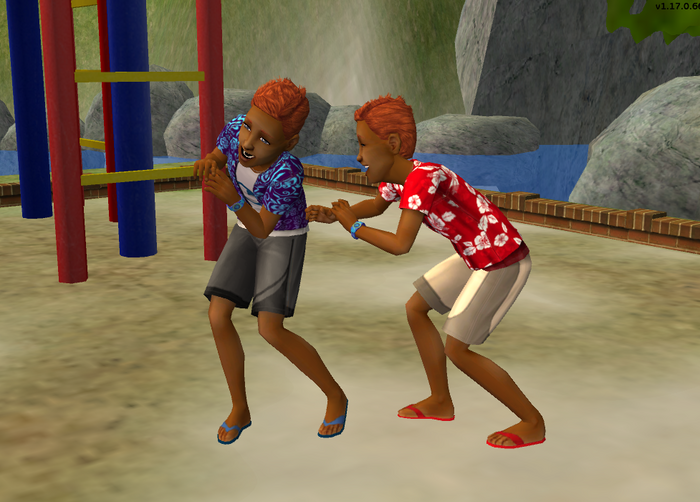 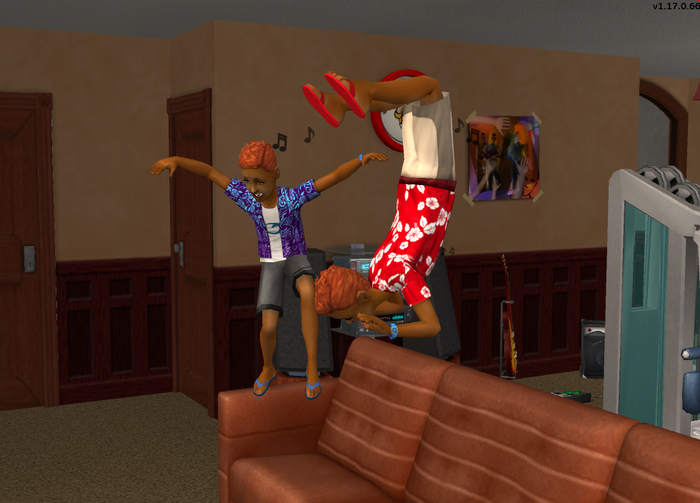 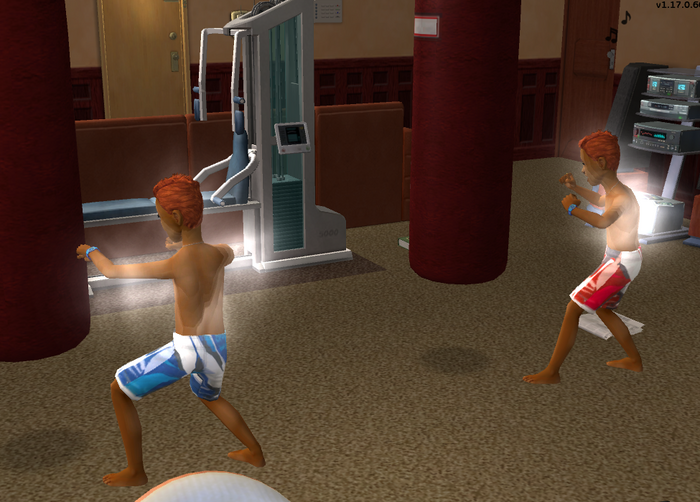 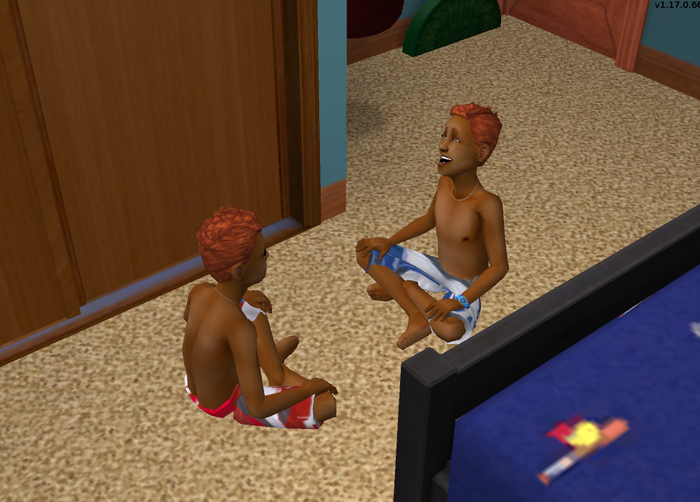 Now I'm no photographer (Although I've shown interest in it recently), but surely these images tell you an awful lot about these two brothers.

It's Friday, so Johnny prepares some hamburgers. 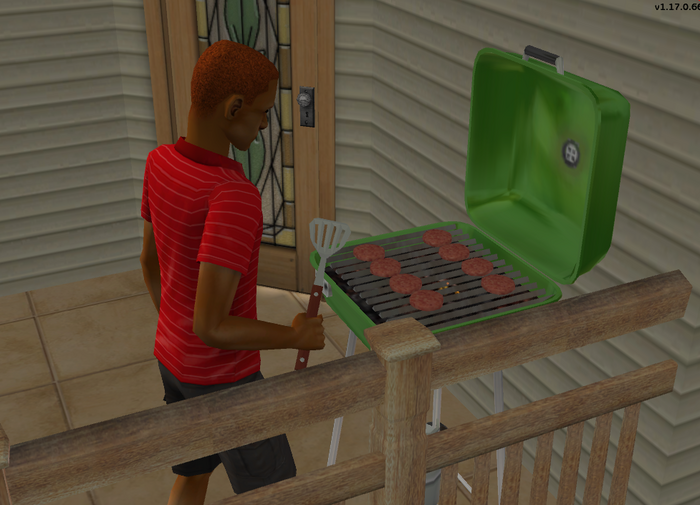 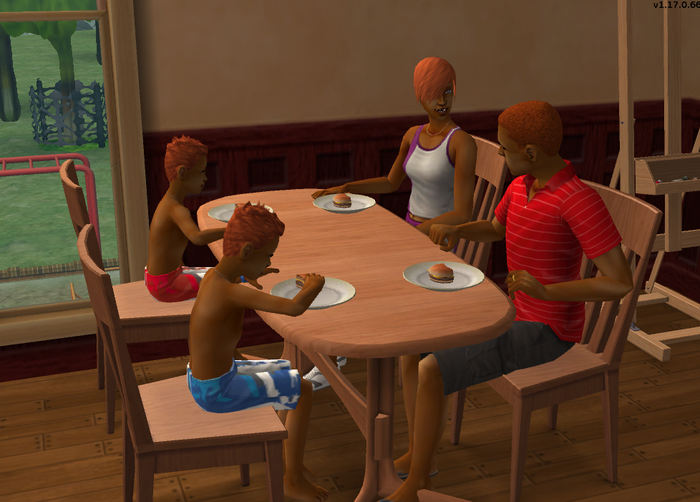 Unfortunately for the Urbans, the maid doesn't work overnight, so in order for there to be room for the breakfast dishes tomorrow they'll have to wash the dishes themselves. 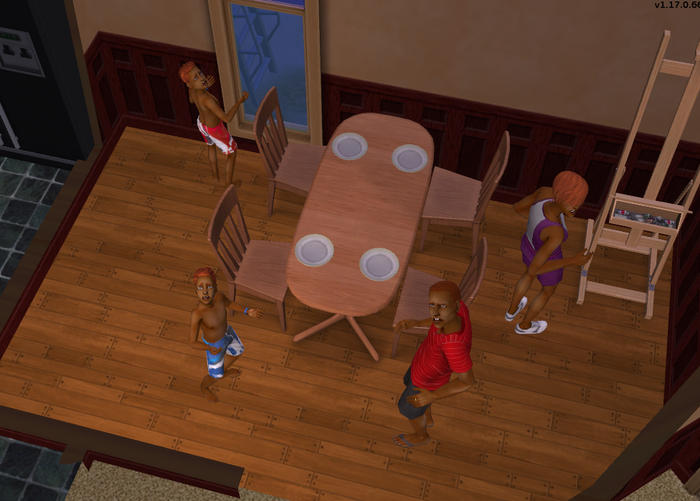 Whoa guys... you don't have to look like prisoners breaking rocks in a chain gang. 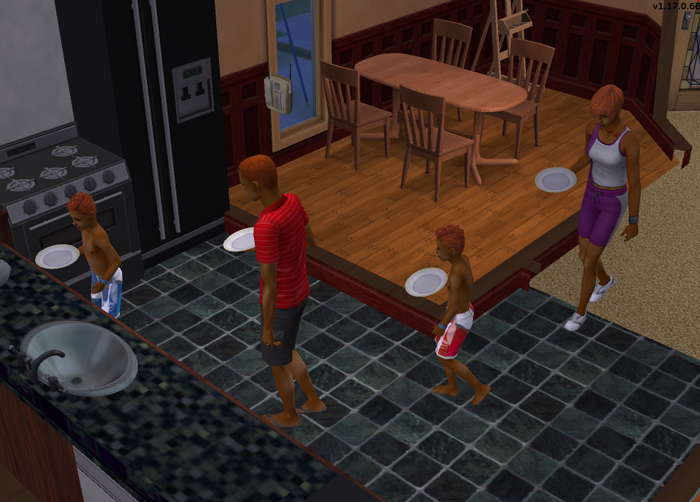 5AM wakeup times means that the Urbans don't tend to stay up very late. 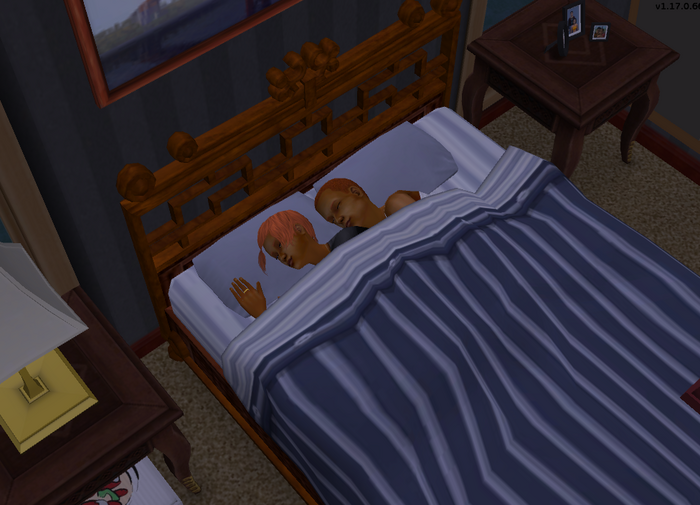 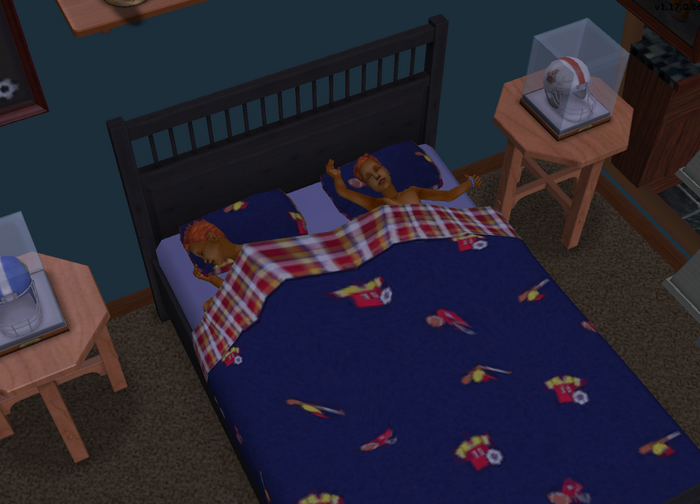 And so, another day of boring routine passes. For Johnny and Suzie, it's paradise; for Jared and Tommy, it's a prison. Why can't they just cut loose their chains and go have an adventure?

For many years, I did not actually think of a proper storyline for this family; however, now that I've come up with one, it only makes me feel more and more attached to these Sims. Yeah, I know they're just pixels on a screen, but the characters I create for my own novels and stories are just thoughts — or are they? A fictional character does not mean a "false" character, for even a work of fiction can make a huge difference in the real world. For the Urbans, perhaps it's a reflection of today's youth. Should we encourage them to explore and change the world or should we just shun them and force them through twelve long years of mandatory schooling to "kill" their inner spirit and replace it with boring, apathetic people that only think about their own comfort?

The following images were processed but cut from the final version of the forum post.

Retrieved from "https://www.thesimswiki.com/w/index.php?title=Fanon:Urban_family&oldid=245284"
Categories:
Hidden category:
Cookies help us deliver our services. By using our services, you agree to our use of cookies.